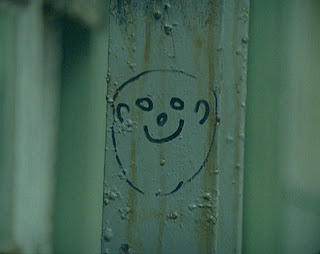 Chapter I of Ben Rivers’ new 16mm film Sack Barrow (2011) begins with a black and white shot of an empty factory. Tarpaulins blanket the workstations, liquid pools on the dusty floor, and a bank of strip lights give off a bland, indifferent glow. This is Servex Ltd, a metal electroplating plant on the outskirts of London that was established in 1931 to provide employment for limbless and disabled ex-servicemen. Having struggled for many years to remain a viable business, it finally closed in 2010. Rivers’ camera lingers over the chemical precipitation that has accrued on the factory’s machinery over its eight decades of service, panning across a crystal topography that resembles frostbitten snowballs, or the lobes of a calcified brain. With its mineral coating, there is something of the fossil about this abandoned site. It is a deposit from a lost past of labour and production, as out of place as a trilobite washed up on the shore of a 21st century beach resort.

A few seconds before the beginning of Chapter II, Rivers’ footage shifts from dull green tones to full colour - an echo, perhaps, of Victor Fleming’s 1939 film The Wizard of Oz, in which a similar chromatic switch points to a transition from quotidian Kansas to the fantastical realm of Oz. What Rivers shows us, however, is not the bright gleam of the Yellow Brick Road, but rather a collection of dull blue barrels of toxic chemicals, bearing an image of a grinning skull and crossbones and stacked untidily against a wall. Hanging from the wall’s breezeblock surface is a handmade sign, on which the words ‘SACK BARROW’ have been painted in unevenly spaced capitals. A ‘sack barrow’ is an L-shaped, two-wheeled handcart, used for moving bulky or heavy burdens. Employed by Rivers as a title for his film, the phrase evokes the original, socially ameliorative mission of the factory, as well as the bodies of its first workers. This device, in essence, is a prosthetic limb, a primitive technology that helps humans deal more easily with objects. Here on Servex’s abandoned factory floor, it speaks of the increasing estrangement of people in First World economies from physical labour, and even perhaps of their estrangement - through the growth of the virtual - from the physical world itself. Few British workers now inhabit workspaces such as this electroplating plant. We are less likely to manufacture objects than to manipulate data, to shuffle infinite zeros and ones.

Rivers shot Chapter II of Sack Barrow in June 2010, during the factory’s final month of production. He focuses on the worn faces of the workers, and their slow, methodical movements, the dipping of metal objects into tanks of steaming fluid, and the mineral build up on the machines, which is revealed by the colour footage not to be snowy white but an unctuous brown, somewhere between caramel and clay. Now and then, the screen is filled with a single colour, an extreme close up of the factory’s painted fixtures and fittings. Like Modernist canvases gone to seed, these squares of red, blue and yellow are striated with cracks and dusty with age, as though whatever future they once promised has long been forgotten. Snatches of pop songs play over the plant’s radio: Dusty Springfield’s The Look of Love (1967), Manfred Mann’s Pretty Flamingo (1966), and The Platters’ Smoke Gets in Your Eyes (1958). Notably, even the newest of these tracks is over 40 years old, and watching Rivers’ film - with its archaic costumes, players and mise-en-scène - one might imagine oneself in the Britain of the 1960s, although here the ‘white heat’ of the technological revolution trumpeted by Prime Minister Harold Wilson seems to have been reduced to something smudgy and lukewarm. The workers clock in and out (contemporary concepts such as flexi-time and working from home are utterly alien at Servex), and we catch glimpses of the images they have brought into the factory to keep them company. There is a lot of soft-core pornography of the 1970s/80s ‘glamour girl’ sort, the models’ faces caked in chemical precipitation, any lust they may once has provoked dulled by long years of familiarity. More curiously, there is a postcard of a Neolithic dolmen, its stones and dark apertures echoing the cave-like environment of the plant. We can only guess what motivated its builders to place its great boulders one atop the other, but it seems clear that it was not profit, or at least as understood by conventional economics. Elsewhere, we see a smiling face drawn on to a pillar in magic marker. There is something peculiarly British about this image, a kind of shrugging, cheerfully philosophical acceptance of a particular type of working life. The face now smiles on an empty factory, a comfort or irritation only to the ghosts of a disappeared past.

In the film’s final chapter, we watch the factory staff take a tea-break while in voiceover a woman reads a passage from The Green Child, a fantasy novel written in 1934 by the art critic, anarchist poet, and ICA co-founder Herbert Read. Describing a journey through water into a crystal cavern illuminated by greenish, phosphorescent light, Read’s words seem to allude here to the factory’s grotto-like appearance, and to the transition from one (historical) reality to another. Rivers’ film ends with a shot of a lone worker departing the factory, framed by a grimy window. What strange cave he is heading towards - what new hurried and alienating world of work - is ours to imagine, or to draw from experience.

Ben Rivers (b. 1972, Somerset, UK) lives and works in London. He is the winner of the 2011 Baloise Art Prize. He is represented by Kate MacGarry, London.

On July 4th, 2011, as part of the London Literature Festival, a special one-off screening of Rivers’ recent film Slow Action (2010) will take place in the Royal Festival Hall, followed by a discussion with the film’s narrator, the science fiction novelist Mark von Schlegell. Tickets may be booked HERE.

Positioning itself somewhere between art and design, Ben Wadler’s work acts as a reflective space to sit and wonder. It reminds us that what we refer to as ‘Art’ is something that can only come into being with us there to animate it and, in a way, to re-make it each time.

For Stonehenge Tetris, Wadler shifts the tone of the Hayward’s Concrete Café away from an aesthetic of plainness, introducing ornament in order to explore it as a constructed space. Appropriating a decorative vocabulary drawn from stagecraft and interiors, he shows that adornment need not only be celebratory, but can also be used to provoke questions.